Introduction
Survey of the households demand is very important and necessary in planning for production of various goods and services in order to regulate the domestic consumption, import and export. Given the importance of this issue, the study of consumer behavior and their consumption pattern is a major part of economic research with the objectives of analyzing the consumption structure, identifying appropriate patterns for explaining the consumer behavior, predicting consumption and its changes. The main objective of the present study is to investigate the consumption and demand behavior of basic food items (cereals, livestock, poultry, fish and shrimp and its products, dairy products, oils, fats and butter, fruits, pulses, sugar and vegetables) in urban areas of Iran using pooled data and SURE method.
Materials and Methods
According to the objectives of this study, the best functional form of demand should be identified to explain the consumption behavior of urban households in Iran. Therefore, first the Generalized Ordinary Differential Demand System (GODDS) using the data of urban households (pooled data) was estimated using the seemingly unrelated regression (SURE) method and then, the appropriate functional form was selected. Then, according to the appropriate functional form, price and income elasticities were calculated by applying the conditions of adding up, homogeneity and symmetry for each of the equations of the demand system. Therefore, in order to choose and determine the appropriate functional form for food demand system, Generalized Ordinary Differential Demand System (GODDS) was estimated.

The above model includes the Rotterdam demand system, differential form of AIDS, and the two hybrid models NBR and CBS. The selection of a suitable functional system is based on the constraints applied based on the θ1 and θ2 parameters. The system of demand equations was estimated using the seemingly unrelated regression (SURE) method. Also, in order to be consistent with the theory of utility, the constraints of adding up, symmetry and homogeneity were applied as linear equations. In order to investigate the impact of drought and also the targeted of subsidies, two dummy variables were included in the model. In other words, the first dummy variable was entered into the model to investigate the impact of drought in 2008. The second dummy variable was entered in order to investigate the effect of targeted subsidies in before and after 2010.
In order to better understand household consumption pattern and cost situation and to analyze income, price and cross-demand elasticities, and the deciles were divided into three main groups. In other words, the average of the first three to the third decile was placed in the first group. Also, the average of the fourth, fifth, sixth and seventh decile in the second group and the mean of the eighth, ninth and tenth deciles were in the third group. Accordingly, in this study, the data used are pooled. The required data of research were gathered from the Statistics Center of Iran for the period 2006 to 2017.
Results and Discussion
Based on the results of the Wald test, the functional form of AIDS was selected against others. Price elasticity calculation results showed that own-price elasticity of food demand in urban areas is negative. Also, the highest own-price elasticity of food demand was related to fish and shrimp and its products (-1.03). The positive cross- price elasticity of food indicates that there is not necessarily a two-way substitutional relationship between food items and only in some cases (such as cereals and pulses), there is a substitutional relationship. Most positive cross-price elasticities have low values, indicating a poor substitution between food items. The calculation of income elasticity indicates the normality of commodity groups. The income elasticity of fish and shrimp and its products is greater than one that illustrates the luxury of this food.
Conclusion
Calculating the self-price elasticity of food in urban areas indicates the high elasticity of fish and shrimp and its products. Also, the income elasticity of fish and shrimp and its products has been more than one, which indicates the luxury of this food in urban areas. Therefore, pricing and subsidy policies should be set in such a way as to ensure a minimum consumption of animal protein for each individual in the community. Also, the policies governing the production and supply of the group (cereals, oils, fats and butter, fruits, vegetables, pulses and sugar) as well as the policies governing their consumption should be regulated in some way that the minimum supply of foods is to be possible for households. 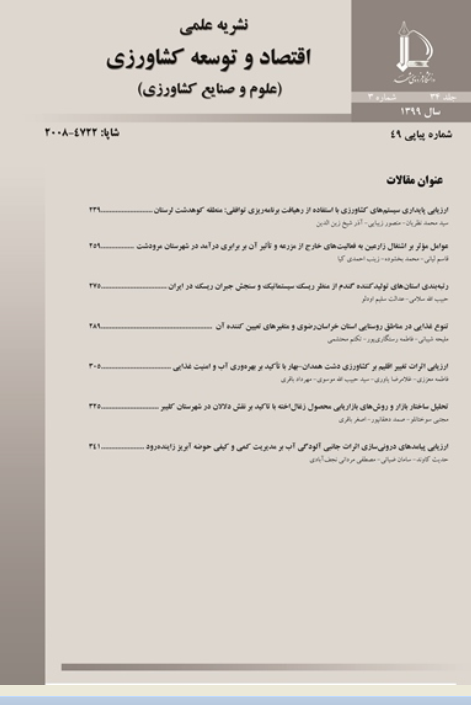