Introduction: Studying Iran’s poultry sector shows that the feed costs account for a large portion of the total cost of poultry production. Besides, corn as the feed for poultry had the largest share of total feed cost. According to the governmental trade policy and exchange rate variability, corn prices fluctuate in Iranian market. However, the demand for chicken meat has increased in recent years. This is due to the relative increase in the price of red meat compared to chicken, as well as promoting the health benefits of consuming white meat (chicken and fish). However, the chicken meat market has been accompanied by price shocks and price increases, and these fluctuations are one of the main challenges of poultry industry in the country. Examining the cost of production inputs in the Iranian poultry industry shows that poultry feed costs, especially corn, accounts for the largest share.
Materials and Methods: In this study, the smooth transition autoregressive (STAR) model was used to investigate the threshold effect of corn price, as one of the most important inputs of poultry feed, on the price of chicken meat. This method is a nonlinear approach of time series analysis which evaluates the asymmetric changes in the pattern parameters with a smooth transition by considering one or more thresholds. Nonetheless, this model allows several regimes and the transition among them to examine the relationship among research variables which is more realistic than that obtained using the traditional linear regression model. To estimate the nonlinear STAR model, monthly data of corn and chicken meat prices from 1993 to 2020 were collected from the State Livestock Affairs Logistics (S.L.A.L). Several steps were performed to estimate the STAR model. First, data stationary was tested using the seasonal Hylleberg, Engle, Granger, and Yoo (HEGY) unit root test. After investigating the order of variables, the optimal number of lags was determined using the Akaike information criterion (AIC). Smooth threshold linearity versus nonlinearity test was then performed to ensure that the STAR method was appropriate. Then, the applicable forms of transfer function and transfer variable were determined. Finally, after estimating the model, the hypotheses of normality and non-autocorrelation of residuals were tested.
Results and Discussion: HEGY seasonal unit root test indicates that the logarithms of corn and chicken meat prices do not have seasonal and non-seasonal unit roots, and these data are stationary. Then, three lags are selected as the optimal number of lags using the AIC, and the first lag of chicken meat logarithm is determined as the best transition variable based on the minimum sum of squares of error. Besides, nonlinearity tests suggest that the Exponential Smooth Transition Auto-regression (ESTAR) specification with two-regime switching fits the data better. The empirical results imply that the real threshold value of chicken meat price is statistically significant and equal to 1028.6 Rails. According to the consumer price index in 2020, the nominal threshold value of chicken meat price is 28800 Rails. Therefore, 1% increase in the price of corn will increase chicken meat price by 0.4% and 1.2% in the lower and upper regimes, respectively, after three months.
Conclusion: In this study, the threshold effect of corn price as one of the most important inputs of poultry feed on the price of chicken meat was investigated using Smooth Transition Regression (STR) model. This study's results show that the effect of corn price on meat price is nonlinear and asymmetric. The asymmetry feature is revealed in three aspects: lagged impact, direct impact, and the strength of influence. Based on the results, it is suggested that the government adopt appropriate policies to establish the stability in corn price as one of the most important inputs of poultry industry via foreign exchange and trade policies. Thus, fluctuations in the price of chicken meat can be prevented. It is also expected that if the chicken meat price increases in one period, the price in the next period will also be affected by the relationship between the first lagged chicken meat prices and its current period prices in both regimes. Therefore, the government should prevent fluctuations in chicken meat prices to ensure food security. In this regard, in addition to implementing pricing policies affecting the price of poultry industry inputs, based on the results of the previous section, controlling the price of corn is the most important factor. 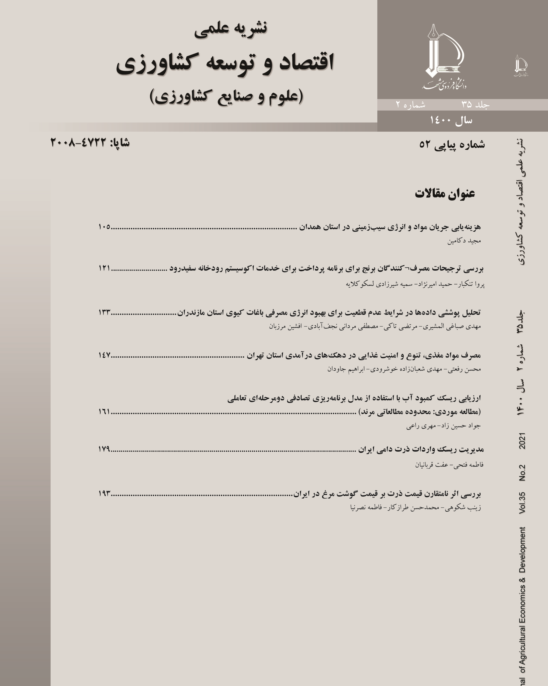