Introduction: Agriculture is a risky activity and a wide range of risks are affecting the income earned from agricultural products. Market risk is the main source of revenue fluctuations in agriculture in all over the world. One of the subsectors of agricultural sector is animal farming industry that its changes during recent years have greatly influenced the revenue of investors in this industry. Considering the importance of livestock subsector in the agriculture sector, identifying and estimating the risk of livestock units are important.
Materials and Methods: The first step in activity risk management is to choose a model to identify and measure the risk of that activity. Risk assessment models are selected based on different factors such as the type of projects and their risks. In this regard, a concept discussed in the field of risk assessment in agricultural units is the value at risk (VaR) criteria. Value at risk is a statistical analysis that is mainly used in determining the quantitative risk of market and measures the most expected losses under normal conditions of the market and also during a certain period of time at a specific level of confidence (Radpour & Abeduh Tabrizi, 2009). This criterion summarizes the risk of portfolio in just one number under the value at risk measure. In the present study, the profit of each calf was calculated and the risk of weekly profit of a head of calf was determined by the value at risk method using Monte Carlo simulation for two time periods of 2004 to 2018 and 2013 to 2018 by @Risk add-in. Also, a multivariate regression was estimated by @Risk to analyze the sensitivity of the expected profit for each variable in the model. Parameters that have the most impact on the profit of each head of calf are identified as the most sensitive and important inputs related to the profit variable. Finally, the value at risk of the last cattle feeding period in the confidence level of 95% using weekly VaR at a level of 95% is predicted.
Results and Discussion: In this study, after calculating the profit of each Holstein calf, a linear regression was estimated to evaluate the standard deviation of the calculated profit on the time trend. This regression coefficients indicate that the standard deviation of the profit is increasing at the rate of 1622.9 Rials/week during the studied period. In other words, the risk of fattening activity has increased over time. To assess the risk of cattle fattening industry profits, price and performance variables were considered as expected variables in calculating the risk of profit. As the concept of value at risk is tied to the probability distribution of inputs and outputs, and its calculation process is equivalent to the probability distribution estimation process in the future period and also, considering that the Monte Carlo simulation is done on the repeated unstable and random inputs prices based on their probability distribution, finding the best distribution of inputs to produce random numbers is very important. Therefore, at first, the most important inputs in calculating profit were determined and then, their probability distributions were obtained according to the defined range of distribution using @Risk add-in. Because of the continuous nature of data, the Anderson-Darling test was used for verification of the obtained distributions. After Monte Carlo simulation and production of semi-random numbers for the desired inputs, 100000 simulated profits were obtained which the corresponding percentile of 90, 95, and 99% confidence intervals of the profit distribution were extracted as a weekly value at risk of per head Holstein calf. The results of estimating profit risk by VaR criteria showed that the weekly profit value at risk during 2004 to 2018 was 302108 Rials/week which is not a small figure for each calf profit during a week and presents the high profit risk of this industry. Also, the value at risk at the last 6 years of studied period was 600000 Rials. In conclusion, the results showed that weekly profit VaR increases 65292.07 Rials in each period. According to the predictions, the VaR of next period with a confidence coefficient of 95% will be 7197729 Rials. Also, the results of sensitivity analysis revealed that the most effective inputs on weekly profits were the prices changes of the calf, maize, and alfalfa inputs. Therefore, these inputs changes can also affect the risk of profit in cattle feeding units. In conclusion, controlling the living calf market as the most important input and veal market as the product of the fattening industry and corn, alfalfa, and soy markets has the most impact on the stability of the producers' profitability and ensures the profit of each head of livestock.
Conclusion: In this study, VaR criterion was used to assess the profit risk of cattle feeding units in Iran. According to the results, it is suggested to introduce the VaR criterion as an applied criterion in determining the risk to producers and investors of the agricultural sector. Therefore, it is necessary to provide continuous report of the value at risk amount of the industry by relevant organizations to help the investors and producers to clarify the status of the cattle feeding industry. Also, considering the changes in market conditions during different periods, finding the most important effective inputs on profit and controlling these inputs markets in order to control the producer’s profit fluctuations should be taken into account. 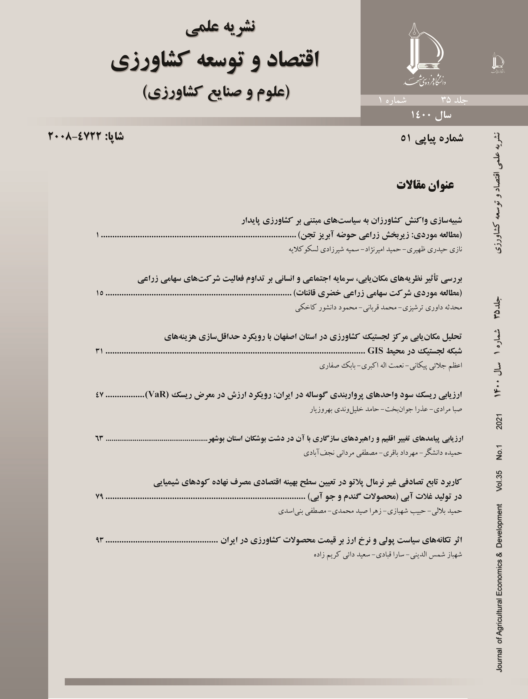