Introduction: Mushrooms have valuable nutrients and physiological traits which has made it a suitable food for households. Among the various mushrooms, the King Oyster (Pleurotus eryngii) is considered as the best species among Oyster mushrooms, due to its superiority in stem and cap strength, thickness and fleshiness of its white stem, long shelf life, good taste and aroma, and numerous nutritional and medicinal properties. In addition, the edible-medicinal mushroom of the King Oyster, due to its very low moisture content and high strength between the stem and the cap, has a very long shelf life compared to other mushrooms and is therefore introduced as a high durability product. The King Oyster can remain fresh for 15 to 18 days after harvesting in suitable storage conditions. Also, this mushroom which is produced without application of any fertilizer or toxins is widely used as a healthy food, and in many countries, including Korea, China and Japan, it is facing widespread consumer demand. Therefore, considering the numerous characteristics of King Oyster and its substitution with Button mushroom, the aim of this study is to investigate the factors affecting household preferences for its replacement with Button mushroom.
Methodology: The study population of this research includes households living in Mashhad. As the edible-medicinal King Oyster mushroom is a special mushroom, this product is distributed only in some specific areas due to its unique features. Therefore, the Convenience sampling method was used. Sample size was determined based on the Morgan Table, and the highest volume, 400 samples, was selected to accurately assess consumer behavior. Also, the questionnaire was completed in 2019. Due to the sequential nature of household consumption preferences, the ordered logit model has been carried out to achieve the research objectives. The ordered logit model is a useful tool when the researcher seeks to analyze the behavior of consumers (households) in different groups.
Results and Discussion: In the present study, after creating a consumption experience for households that had not previously consumed the King Oyster, empirical findings showed that a significant percentage of households (47.5%) preferred to substitute the King Oyster for Button mushroom, and only 12.5% ​​of households had low tendency to do that. The Brant test results showed that the values ​​of the status parameters for all the dependent variables were constant and uniform, and in this respect, it is permissible to apply the Ordered Logit model. Our results indicated that variables such as household income, importance index of pre- and post-cooking appearance characteristics, food and medicine awareness index, sales promotion index, product accessibility index, and familiarity with the King Oyster had a positive and statistically significant effect on the probability of consumption. On the contrary, variables such as age of the head of household and price index of the King Oyster had negative and significant effect on the probability of being in groups with higher levels of consumption preferences.
Conclusion and Suggestions: This study aimed to investigate the factors affecting household preferences for its replacement with Button mushroom. For this purpose, ordered logit model was applied in the households’ consumption in Mashhad city. Based on the results, the familiarity with the King Oyster mushroom had positive and significant effect on household consumption preferences, indicating that cognition and awareness of this product will increase household preference for substituting this mushroom for button mushroom. Thus, it is suggested that marketing policies and programs focus on introducing this product. In addition, creating a consumer experience for households initially led to familiarity and ultimately to the preference of the King Oyster rather than the button mushroom. Therefore, it is strongly recommended to create a consumer experience for households that have not yet consumed this product before. This can be done through King Oyster distribution stands as a useful tool in a well-designed program. 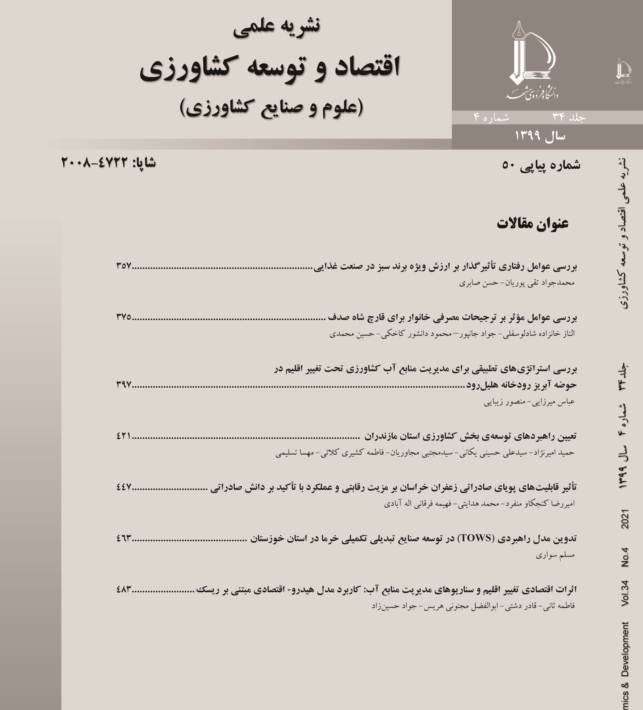